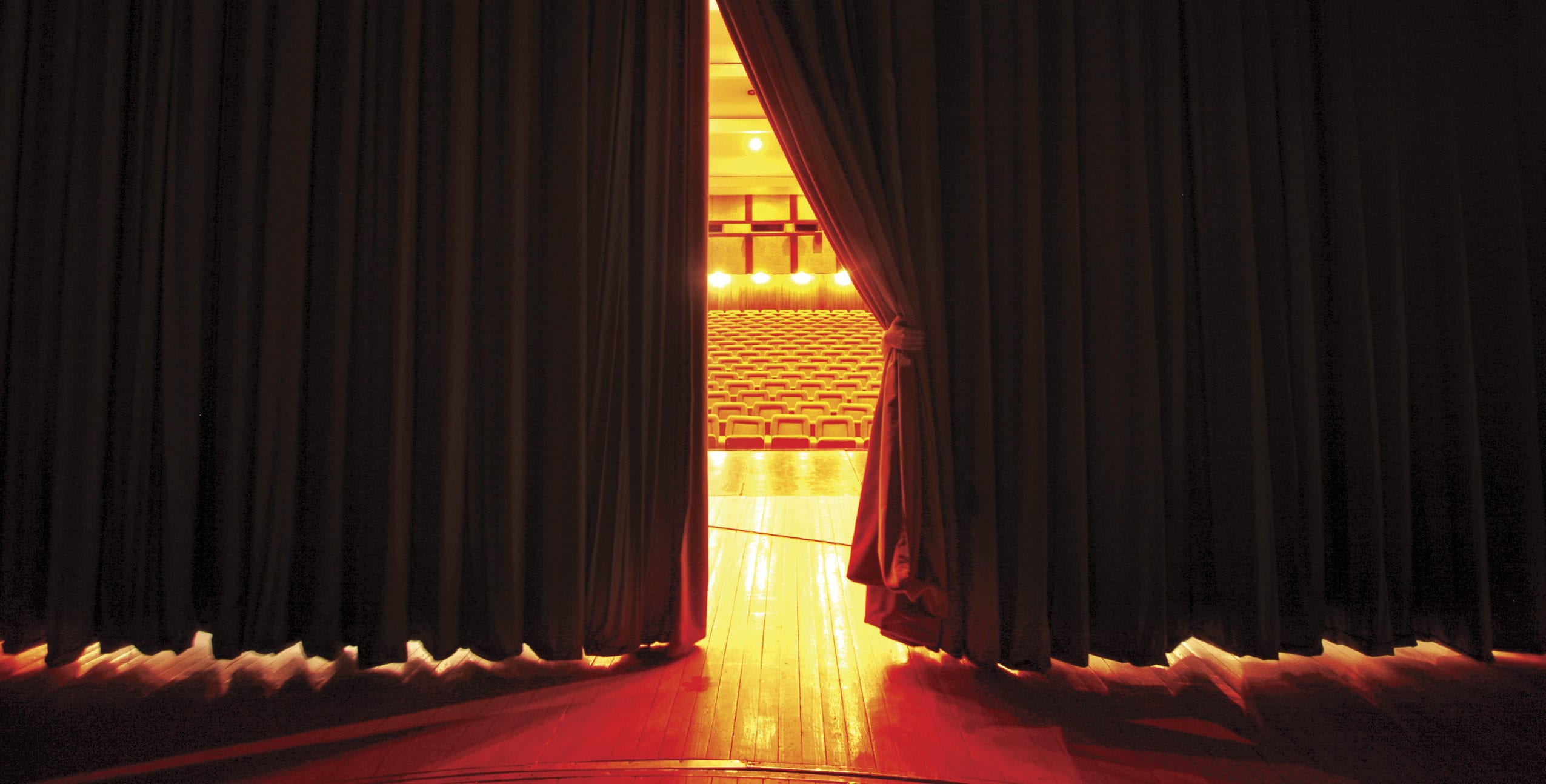 If you’re well-acquainted with the attractions and institutions that make Lancaster, PA, a unique place to visit, play, and live, you’re likely familiar with the Fulton Theatre—the city’s fantastically historic yet thoroughly modern performing arts venue.

If not, it’s time to meet the “Grand Old Lady of Prince Street” in today’s post!

Home to the Lancaster Symphony Orchestra, as well as a regional destination for well-produced popular musicals and stage plays, the Fulton first came to life way back in 1852 as a community center for meetings, lectures, concerts, and theatrical performances.

Though it’s had a few reincarnations over the years, including a stint in the mid-20th century as a movie house, today’s Fulton Theatre is one of the best live performance stages in perhaps the entire USA. (It is, after all, reportedly the oldest working theater in the nation.) And, the Fulton rounds out the slate of stellar theatrical venues Lancaster has to offer, which also includes Sight & Sound Theatres and the American Music Theatre (AMT).

Feeling like a show? The current 2019/2020 season is chock full of familiar favorites within the Mainstage Series, as well as family-friendly delights in the Eichmann Family Series and critically acclaimed works in the Studio Series.

Get your tickets today for the best seats in the house!

This regional premiere staging of Dame Agatha Christie’s perennially popular 1934 murder mystery novel has been adapted by Ken Ludwig with a shot of humor that’s sure to shake off your winter “blahs.” Join everyone’s favorite Belgian PI, Detective Hercule Poirot, as he works to solve the case aboard the elegant Orient Express passenger train, which just so happens to be snowbound along its route through Europe.

With music and lyrics by 1980s pop sensation Cyndi Lauper, Kinky Boots is the quintessential 21st-century American musical. Based on an inspired-by-true events 2005 British film of the same name, Kinky Boots premiered in Chicago in the fall of 2012 and opened on Broadway in spring 2013 to mixed reviews at first. Though an underdog, the show became an award-winning smash hit.

The story follows Charlie Price’s unfortunate inheritance of his father’s failing shoe factory and the unlikely turnaround he manages with help from a drag performer named Lola, who needs some high-heeled “kinky” boots. Anyone who has ever experienced the weight of parental expectations will love this musical, a regional premiere performance here in Lancaster.

Who in America isn’t endlessly intrigued with the disastrous sinking of the RMS Titanic during her maiden voyage on April 15, 1912? While the tragedy has inspired scores of fictional stories about the Titanic’s crew and passengers—many of whom in first class were well-known socialites and celebrities of the time—few have explored the factual story of the ship herself. That’s the impressive feat this musical accomplishes with breathtaking sets and memorable music!

A fantastic summer blockbuster, Jersey Boys features the unforgettable “golden oldies” hits of the 1960s by Frankie Valli and the Four Seasons. This musical explores the beloved pop group’s rise to superstardom, their eventual breakup, and their induction into the Rock & Roll Hall of Fame in 1990. You’ll be singing along to all your classic favorites like “Dawn,” “Big Girls Don’t Cry,” and “Can’t Take My Eyes Off You!”

What happens when the famous Seven Dwarfs are actually seven important historical figures? Well, the classic Snow White tale we all remember is just a little bit different! Kids of all ages will love this retelling, which packs a great message about finding true happiness.

Be transported under the sea for an incredible all-musical adventure! Join Mermaid Melody and her friends Bobell the frog, Turtell, and Flutter the butterfly as they try to stay out of trouble with villainous Seaweed the sea witch.

Beauty and the Beast

It may be “a tale as old as time,” but this staging of the classic fairytale is interactive and carries a very modern message. It’s not technology that will unlock all of your dreams, but imagination and creativity!

An Act of God

Billed as “a divinely outrageous comedy,” An Act of God explores what might happen if God returned to Earth to rewrite the Ten Commandments for our social media-obsessed culture. Playwright David Javerbaum asserts that this play began as “a series of tweets” before evolving into the irreverently funny book The Last Testament: A Memoir By God, and then into the play itself. Naturally.

At the end of the American Civil War, a wounded Confederate soldier returns to his family’s once-grand home to find ruination and abandonment, save for two of his former slaves. The soldier, whose family was Jewish, shares the first Passover following the war’s end with the now-freed Simon and John. The three men together contemplate their new realities and the painful memories of their extraordinary past as enslaver and enslaved.

The autobiographical story of (Pennsylvania native) cartoonist Alison Bechdel’s early life and process of self-discovery, this groundbreaking musical is based on Bechdel’s 2006 graphic memoir of the same name. Narrated by adult Alison and told in a series of vignettes, Fun Home explores themes surrounding family relationships and how the people closest to us shape our lives and experiences.

How About Dinner to Go with that Show?

Don’t forget that Lancaster is also home to a delicious restaurant scene that rivals much larger metropolitan regions. Before you check out the next great show at the Fulton Theatre, you’ll want to be sure to grab a bite at one of our favorite downtown eateries!

Not a Lancaster Local? It’s Time to See What You’ve Been Missing!

Here at Explore Retirement Living, our goal is to bring attention to Lancaster County’s best-kept secrets, as well as its most prominent attractions. We hope to entice those considering a move in retirement to see how Lancaster is growing and discover why our area is such a fantastic place to live!

Don’t hesitate to get in touch or connect with us on Facebook to learn more about our world-class retirement communities today.

Lancaster County is consistently ranked in the top five places to retire. Tourism, healthcare, the safety of our communities, and food are just a few of the many reasons for these consistent rankings. One other enticing thing about Lancaster you may not be aware of is...

8 Must-See Historical Sites for Retirees to Visit In Lancaster

Retiring to Lancaster County, Pennsylvania? One of the best ways to enjoy your retirement in one of the top retirement destinations in the US is to take a trip back in time.  No, the good people of Lancaster haven’t yet perfected the time machine. What Lancaster does...

Indecision. You’re not alone. We’ve all struggled with decision-making. Sometimes, it’s tempting to forget about the decision that needs to be made and realign your time and talents to something easier. Not exercising thoughtful decision-making NOW can equate to...

Moving to a Retirement Community: Top Tips for Home Staging

It is possible to achieve the unimaginable. For some, even the thought of preparing to move to a retirement community is exhausting. You can do it, and we can help! Your ultimate goal is to secure a buyer for your home, right? In today’s crowded real estate market,...

Retirement In Lancaster County: Things to Do and See in Elizabethtown

One of the biggest draws about retiring in Lancaster County, Pennsylvania, is the easy access to many wonderful, small-to-mid-sized towns. Among those towns, one that stands out in residents’ hearts is Elizabethtown. Referred to as E-Town by most locals, Elizabethtown...